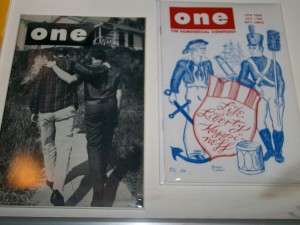 I know that there are more important things going on in the world, news-wise, but I have to confess that I was pretty broken-up by yesterday’s news of the abrupt closure of the Washington Blade, among other gay papers owned by the same publishing company. The rest of the gay press has of course been mournfully sympathetic in its eulogies for one of the most important pieces of gay media history, but one of the best write-ups, I was pleasantly surprised to see, came from the Post, whose treatment of LGBT issues over the years has not been precisely sympathetic:

“It’s a shock. I’m almost speechless, really,” said Lou Chibbaro Jr., a Blade reporter who has written for the newspaper since 1976, covering the full arc of the country’s gay-rights movement, from early marches through the rise of AIDS and on to the latest battles over legalizing same-sex marriage.

The Blade, born in an era when most gays lived in the closet, grew in size and stature as Washington’s gay population blossomed and became more politically active and influential. Chibbaro, who wrote his first front-page story for the Blade under a pseudonym at a time when publicly stating one’s sexual orientation could be dangerous, felt the change in dramatic fashion this year, when, while covering a presidential news conference on health-care policy, he was directed to a seat in the front row.

The Blade’s closing comes at a moment of extraordinary optimism for many gays in Washington. The big story Chibbaro and the paper’s other writers have been covering is the bill supported by nearly all of the D.C. Council’s members that would legalize same-sex marriage in the city.

“Here we are, on the verge of having marriage equality, and it would be real shame if the Blade wasn’t there to cover the victory,” said Deacon Maccubbin, owner of Lambda Rising, the gay-oriented Dupont Circle bookstore, which had been advertising in the paper since the shop’s 1974 opening.

A small troupe of activists founded the Blade in 1969, a few months after New York City police raided the Stonewall Inn, a gay bar in Greenwich Village, igniting riots and launching the gay rights movement. In its infancy, the paper was known as the Gay Blade and consisted of a single, letter-size sheet of paper that its editor, Nancy Tucker, mimeographed and distributed herself, scooting around town in a Volkswagen to drop off stacks at gay-friendly bars. The paper’s mission was to unite an eclectic array of gay groups, including drag queens and government workers, literary buffs and motorcycle enthusiasts; inform readers of gay-related services; and warn them about blackmailers and other scammers.

In the ensuing decades, the Blade’s editors became more ambitious, switching to newsprint and dispatching reporters to write about discrimination against gays in the federal government, hate crimes such as the killing of Matthew Shepard in Wyoming, and political and health issues generated by the AIDS epidemic.

The article even quotes Frank Kameny as saying that the Blade “have become the voice of record for the gay community.”

Believe it or not, the Post really gets it right: the gay press is part and parcel of gay history (I’m using the word “gay” intentionally here, for obvious historical reasons). If we are to date the modern gay rights movement back to before Stonewall, we would likely want to begin at the founding of One Magazine in 1952. It was the first gay publication founded by the first gay rights (“homophile”) organization, and it was seminal in establishing the idea that gay identity constituted not some private, internal psychopathology, but a community with a culture. One and its successors helped to spread and coalesce this idea that there was a group of people with shared goals and interests which were worth working to attain. They enabled the parallels between gay struggles and the struggles of other civil rights and social justice movements, and this in turn enabled Stonewall, the first Pride and gay rights parades, and the veritable phalanx of post-Stonewall gay papers. These included, of course, the Blade, but also half a dozen publications in New York and one for just about every other major city. These papers advertised the events of a marginalized and still largely closeted community. They printed the personal ads that couldn’t get printed in other publications. They, of course, reported on the news of hate crimes and police brutality that the mainstream media ignored. Come the 1980s, they were an essential venue of mobilization and organization and dissemination of information surrounding the outbreak of the AIDS crisis. The Blade in particular, by virtue of being based in Washington, was the paper of record of LGBT legislative struggles, reporting on the issues that still impact the community today—from the (eventual) federal response to AIDS through to the recently-passed landmark hate crimes legislation. These papers have recorded LGBT history, and they also are LGBT history.

Probably anyone reading this blog can recite a litany of the reasons the newspaper industry is dying. There are blogs and online editions of papers and myriad ways to access information without paying for it. Instead of paying to put ads and classifieds and personals in papers, people post to Craigslist or dating websites or place ads on websites. Newspapers are losing their revenue—and all these patterns impact what has become the LGBT community doubly. This is a community that is increasingly less ghettoized and more assimilated; what need has it for a particular venue for its ads and its news, when dating websites accept all sorts of advertisements (and dedicated gay dating websites also exist), or when the Post and the Times will cover the issues they once ignored? We no longer live in the era of the NYT’s notoriously poor AIDS coverage. Times have changed. And the Blade, tragically, has locked its offices and fired its staffers.

So maybe Bilerico and Pam’s House Blend and Towleroad—in collaboration, indeed, with the Times and the Post and, heaven help us, the Wall Street Journal—can fill in the hole left by the demise of the Blade and its peers. But how alienating it feels to know that we’re leaving the era when a marginalized community used its print media to band together and organize and share in its solidarity?