I have marched on the San Diego Hall of Justice and City Hall in Manhattan. I’ve protested in Princeton and at Scripps Ranch High School. Today, I marched on Washington. Today, like my mother before me and in the footsteps of a proud tradition of activists and organizers, I got in a van at 6:30am and drove down to Washington.

I marched. I chanted and shouted and cheered (I lost my voice). I cried, especially at the rally when Dan Choi spoke, when Staceyann Chin performed, and when Cleve Jones spoke. I cried most of all when the cast of Hair, who canceled a show to come to the march, sang “Let the Sunshine In.” Readers will perhaps be aware that no song is dearer to my heart than “Let the Sunshine In.” It represents all that is wonderful and all that is left unfulfilled with regard to the American promise. There was no way I could have heard it sung live on the steps of the US Capitol with rainbow flags flying everywhere and not have started to sob. I caught a couple minutes of video of the song, but all you can hear is my tired voice cracking as I try not to cry.

Some of the speakers at the rally referred to the activist legacy that brought us to the steps of the Capitol today. They referenced the civil rights March on Washington in 1963, and countless gay/LGBT rights marches. The invocation which began the rally called out not to God, but to the spirits of activists like Phyllis Lyon and Del Martin, Harry Hay, Frank Kameny, Harvey Milk, and many others. None of those people, in the time that they began their activism, could have brought 100,000 people to the steps of the Capitol to fight for LGBT civil rights. And yet without their struggles, that couldn’t have happened today.

I came home tonight to two things: a tweet from a colleague-friend who proposed different means to the same or similar ends (in other words, Maine before marching), and a flyer from Princeton’s Anscombe Society, advertising their proposal for an Abstinence and Chastity Center on campus. In utterly different ways, both things questioned how I chose to spend my Sunday (and the past few weeks in planning for this Sunday). To my colleague-friend, I say that the fight for equality is not a zero-sum game; I’ve donated my time and my money to Maine even as I remain focused on making sure a contentious election in my own state works out. But doing so did not preclude me from marching today. As they say whenever we do these kind of things, we march for those who can’t—and so I marched today for second-class citizens not just in Maine, but all over America and all over the world. I marched for the people who are unable to come out or unable to travel; I marched—as one speaker at the rally said—for all the people who would have marched today had they not been lost to AIDS or to anti-LGBT brutality. As to Anscombe: I laughed when I saw the flyer that had fallen under my door; I wished I’d been able to tell the kid who dropped it so that I could tell him what a waste of a flyer it was. I wished I’d been able to make sure he knew how 70 kids at his university spent their Sunday. 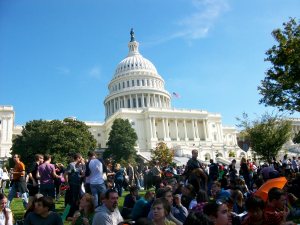 Tomorrow is National Coming Out Day, and my name will appear along with 600 others in an ad in the day’s honor in the Daily Princetonian. There is actually probably nothing more important in this struggle than coming out, and being brave enough to sign your name to something like this. But the old chant does go “Out of the closet and into the streets!” and I think the second clause is nearly as important as the first. 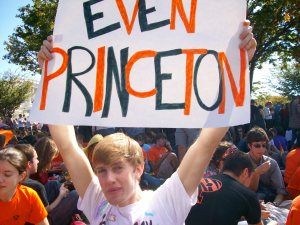 5 thoughts on “Even Princeton; or, This Is What Democracy Looks Like!”